Luna Park: Just for fun, just for the record 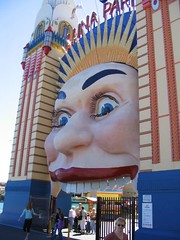 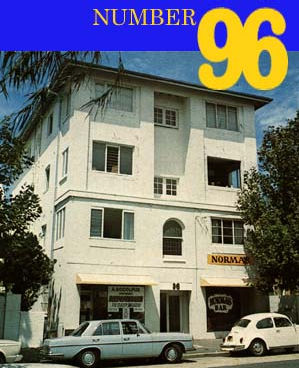 About eighteen months ago, I noticed that the Luna Park, Sydney entry on Wikipedia had a section called Appearances in film and television that was lacking a favourite sequence of mine from 70's soap opera, "Number 96".

It had already been noted on the web page that Sydney's Luna Park had been a filming location for 1959's "Summer of the Seventeenth Doll", plus TV episodes of "Six O'Clock Rock" and even "Skippy the Bush Kangaroo". In more recent years, the movie "Our Lips Are Sealed" (starring Mary-Kate and Ashley Olsen), an episode of "Farscape" ("Infinite Possibilities, Part I: Daedalus Demands") and parts of "JAG" ("Boomerang"), not to mention the excellent documentary, "Spirits of the Carnival: The Quest for Fun", were filmed at the location. The Rotor attraction was also featured in the 2006 film, "Candy".

But... in 1976, several Number 96 residents visited Luna Park. Dorrie and Herb Evans (Pat McDonald and Ron Shand), their old pal Flo Patterson (Bunney Brooke) and a naive man-child named "Junior" Winthrop (Curt Jansen), who believed that he was Herb's secret, long lost son, ended up on the opposite side of Sydney Harbour to the Sydney Opera House. You see, Junior's planned date with opera buff girlfriend, Isobel Mainwaring (Jill McKay) - turned out to be decidedly underwhelming. So he treats his pensioner friends to a trip to Luna Park instead. Scenes of them all in Coney Island, eating fairy floss, and riding on the original wooden Big Dipper and the dizzying Topsy-Turvy House, are featured in the episode. 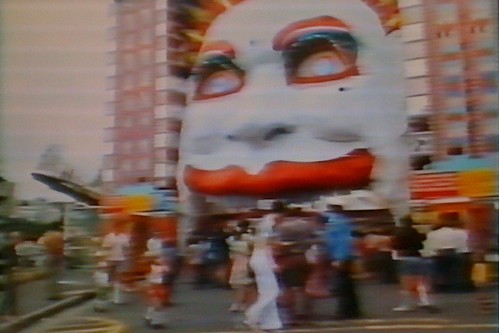 Luna Park in "Number 96" in '76
This footage has been preserved in the first version of a documentary, "Number 96: And They Said It Wouldn't Last", which aired on Network Ten a short while after the episode to celebrate the 1000th episode of the soap opera. Repeats of the special have always omitted this footage. (Thirty years later, all three variations of that documentary have been combined for posterity as a bonus feature on the DVD release, "Number 96: 2 disc Collector's Edition" (Umbrella Entertainment, 2006 - black cover!). The original closing segments, which included the Luna Park footage, was almost lost to the DVD when it was discovered that the original ending was not part of the National Film & Sound Archive's collection - they only had versions #2 and #3!)

(Update: Someone had marked my Wikipedia updates about the sequence with the ominous "Citation needed" warnings but I now realise that blog entries, and websites that do not undergo "independent editorial reviews", are not acceptable as citations for Wikipedia. My attempted revisions have been removed; my original contribution to Wikipedia is destined to remain unproven, I guess... I have been contacted about how to footnote the DVD, though. Now I have to go and learn how to do so.)

Enjoy the Youtube clip! Unfortunately, the person who uploaded it misses the group's arrival, with a fleeting glimpse of them going through the famous face of Luna Park (above). (Don't forget, at the end of this month, another "Number 96" DVD boxed set is due: "The Pantyhose Murders" story arc - pink cover!)

Hehehehe. Which is probably just as well I posted this a few weeks ago!

Absolute gold!!, i knew Dorrie would get to overact like crazy in this :-)

Any news on the next Number 96 dvd set? .. isnt it going to be a b/w collection?

Oh, over on my blog i posted some ebay pics from Number 96, i cant believe i lost out on getting Dons tea set which just came up for auction.

Andrew Mercado is definitely working on a "next DVD set", but it'll probably take the storyline on straight after the Pantyhose Strangler storyline. Those colour episodes have some great Mummy/Daddy comedy stuff in them and will attract more customers than the very early b/w stuff, so Umbrella will want to maximise their sales.

More stills of the 1976 "Number 96" location shoot at Luna Park Sydney are here!