Note that article says "sideshow" (sic).
Posted by Therin of Andor at 11:51 pm No comments:

Who is more futuristic? Both inspired by the 1960s, who is more "futuristic": NASA Barbie or Sydney Opera House Barbie?
Posted by Therin of Andor at 5:36 pm No comments: Earth Hour
Posted by Therin of Andor at 8:30 pm No comments: Handpainted wooden (unlicensed) Dynamic Duo found in a Merimbula souvenir shop in 2007. (There were many other characters, all dated underneath in pencil by the artist! These are marked as March 2005.) Batman's mask and Robin's hair are built up with a textured medium. The bendy legs are made of stiffened sash cord.
Posted by Therin of Andor at 9:08 pm No comments:

Mike Riversdale, via @BarristaMatt who got it from iphonewzealand.co.nz
Schools across Australia are participating in ALL BLACK DAY today, a fundraiser for the city of Christchurch, New Zealand, which was rocked by a large earthquake exactly one month ago. All images are Creative Commons, credited as requested, and found on Flickr. Will you lend Christchurch a hand and help it to bloom again?

The above frieze was created by students in Class SCHM at Penrith Public School, in western Sydney. Teacher Mrs Mead and the teachers' aides helped the students to paint their hands, then they photographed them in the shape of colourful tulips.

Posted by Therin of Andor at 12:12 am No comments: Not wanting to make too light of two international natural disasters, but this little plastic "Star Trek" Andorian charm was purchased on eBay a few weeks ago - and was rather late arriving from Japan. He finally turned up today, with an apology sticker on the envelope: explaining he'd been found in Tokyo, at the bottom of the returning mail bag. So back to Sydney he had to go. Seems he would have been caught up in the big Japan earthquake of 2011. (The envelope wasn't damp, so I guess he managed to avoid the tsunami.)

Andorians may not be punctual, but they are resilient! The sticker reads: "Dear Addressee, We found the mail remaining in an empty bag which had been originally sent to the destination. Thank you. Tokyo International Post Office."

Meanwhile, this recently came back from Mr Kim, my favourite local framing guy: It's the autographed cover of Dayton Ward's "Paths of Disharmony", for which I was a beta reader. Dare you take a stroll in New Therin Park?
Posted by Therin of Andor at 6:25 pm No comments:

How Fay got my shrunken head I have a shrunken head story to share. Too bad there are no pictures of him - a quick Google reminded me that mine was probably more of a shrunken regular skull-with-hair than a full-on voodoo/torture victim.

Sydney's annual agricultural show, The Royal Easter Show, was an eagerly awaited event and, if we got to go, my brothers and I used to save pocket money to buy something memorable from the huge variety of often-bizarre stalls. One year, in the early 70s, I bought a rather large shrunken head (white, rubbery, hollow skull, with long, straight, black nylon hair) and it hung in my bedroom for many years, off the end of the curtain rod. Not a terribly functional toy, though, and I suffered buyer's regret pretty soon after the purchase.

We moved house in 1977 and the head's elastic hanging cord had begun to perish - so, instead of hanging up, the shrunken head ended up going on the end of an unused curtain rod that was leaning in the corner of my new bedroom. That put him up almost at ceiling height, and he was pretty much forgotten. In 1984, I moved out of home, taking my extensive array of collectibles with me, but somehow the head was left on the end of his pole; it's not like I pined to have him back - and my mother converted my old bedroom into an ironing room. Sigh.

Then, in 1987, my parents ended up selling the house back to the people we'd bought it from! Max and Fay had regretted moving interstate and wanted their old house back, and Dad and Mum made a great profit on the deal. About a year later, some neighbours told us the story of how poor ol' shortsighted Fay was renovating what used to be my bedroom. She lifted down the curtain rod and ended up with a shrunken head in her hands. Her screams could be heard across the suburb.
Posted by Therin of Andor at 8:46 am No comments: Pinky: "Do you think we can really rid ourselves of Mousey with this Better Mouseytrap?"

Brain: "Just aim the laser ray gun at those three blind mice. But, you wretched rodent, you should have removed the cellophane from the cheese first. Now fire!"
Posted by Therin of Andor at 6:59 pm No comments:

Yukk in the box 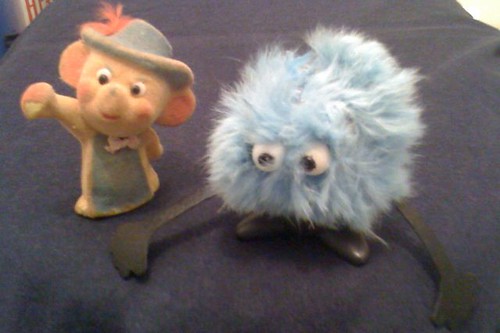 Anyone over forty remember gonks and other fluffy funfair creatures? Well, here's my Yukk (above right), as sold in a wonderful, now long-gone, souvenir, giftware and ceramic ornament store in the old Imperial Arcade in the Sydney CBD in the late 1960s.

Yukks were essentially balls of brightly coloured acrylic "fur" - the fabric was glued to very squat plastic legs, with bulbous "Mr Potato Head"-like eyes poked into the core. They also featured long, thin, leathery arms. My Yukk was blue, and I recently rediscovered him in a box in the garage. My brothers once had one each, too, in Dayglo orange (or green?) and crimson, if I remember correctly - and my youngest brother's Yukk actually sported an actual mismatched "Mr Potato Head" eye after an encounter with our pet dog.

A few years later, a cheaper version of such creatures, usually armless and with wiggly eyes, were very common, usually on the "every child wins a prize shelf" of carnival sideshows.

But a recent viewing of an old episode of "The Magic Circle Club" reminded me of where my childhood fascination for gonks and Yukks probably derived: 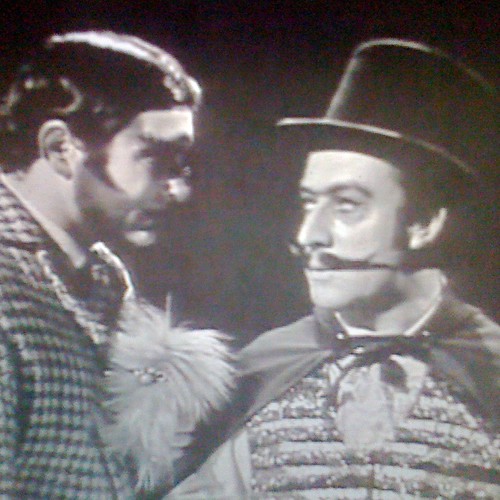 Gaspar, Oscar and Sir Jasper in the episode, "Claude Clumsy: A Smashing Time". 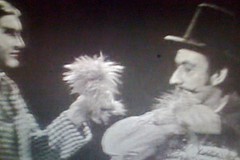 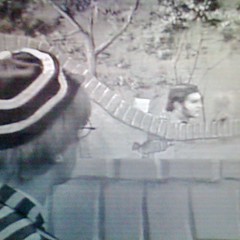 Mmmm. Oscar had a nose like a regular gonk. Yukks didn't have a visible nose.
Posted by Therin of Andor at 10:37 am No comments:

Someone mentioned this video only a few days ago, and then I stumbled across it tonight on Facebook. Love it!

Posted by Therin of Andor at 9:53 pm No comments: