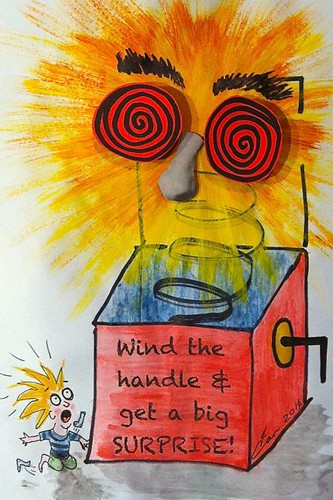 I originally printed out an A4 sheet of cartridge paper with the text on it, intending to use it last week as a Jack-in-the-box for Boxes, but it evolved, instead, into a focus on the hypnotic eyes. (Coincidentally, I've spent the last week packing books into many, many boxes. Preparation for internal house painting!) Collage with acrylic and watercolour paints, permanent black marker and the nose of Roger Woodward.

Update: Week 22: Eyes II. What to do when you've worn out your welcome? The school library's "Welcome" mat had lost all of its signage due to four years of kids trampling in and out. With only an hour to spare, I cut some paper templates freehand and used three cans of spray enamel to create this new message. Final detailing with permanent black marker. 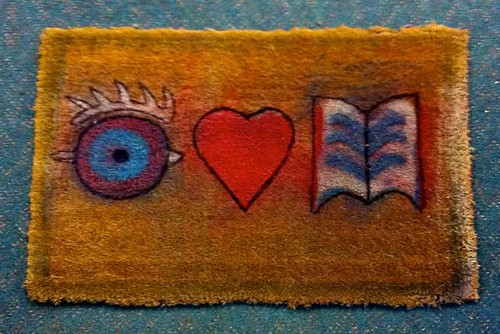 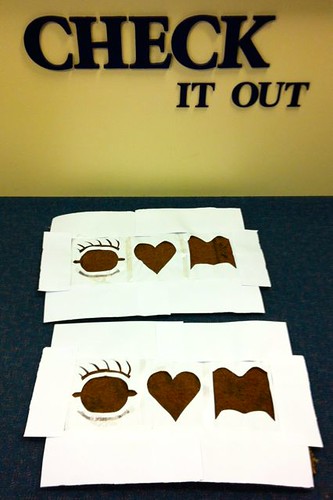 Paper templates
Posted by Therin of Andor at 12:10 am 1 comment: 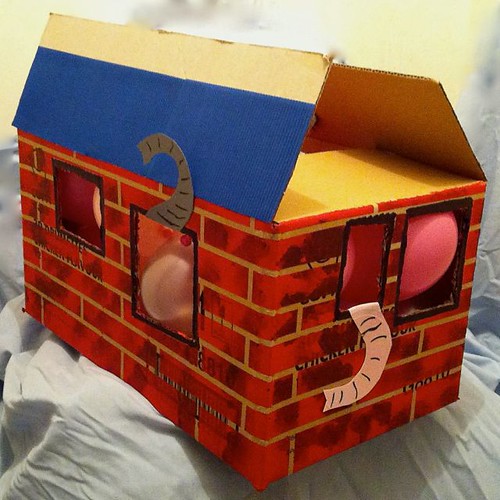 Coinciding with the 2014 National Simultaneous Storytime, this box of elephants from the picture book, "Too many elephants in this house" (by Ursula Dubosarsky and Andrew Joyner) was created with masking tape, red acrylic paint with sponged shading, blue corrugated cardboard, black ink permanent marker and pink and silver waterbomb balloons. Trunks were cut from matching pink and silver plastic partyware bowls. This prop will be part of my school's celebrations of this annual ALIA event. 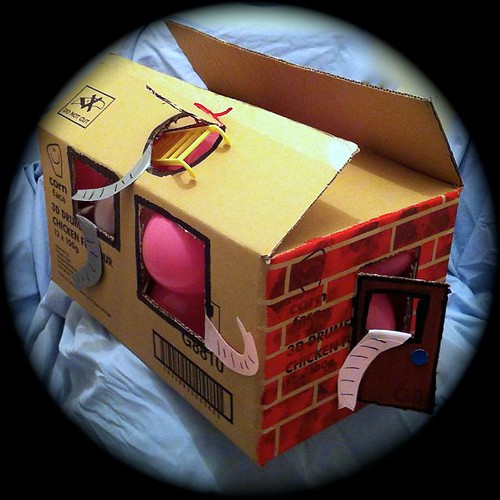 Back of Elephant house

This back panel was left unpainted deliberately. Note the yellow plastic ladder emerging from the chimney hole. 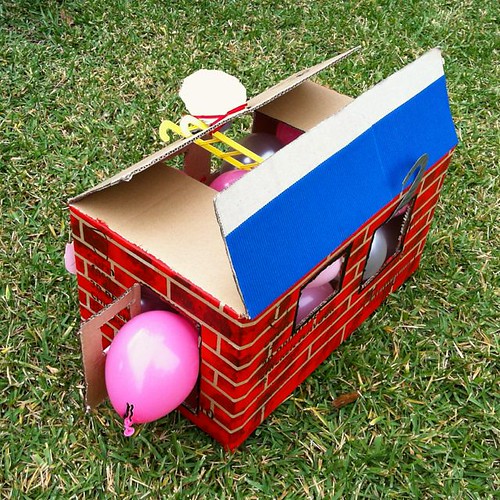 One more elephant squeezes in! 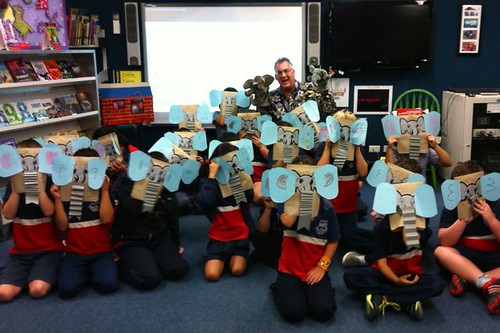 Udates: Inspiration struck tonight whist walking home in the dark from the train station. Here's the Minotaur in his labyrinth on Crete, created in just ten minutes with a cardboard box and a kitchen knife to make some slots. 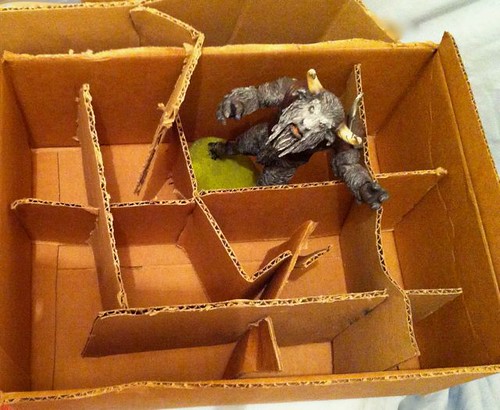 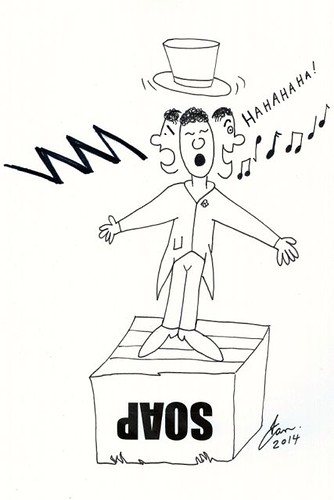 An idea flashed into my head during breakfast and I simply had to do it immediately. Before this Challenge, ideas like this probably would be fleeting - and never made permanent. Corrugated craft board, with colour highlight from an ancient Faber-Castell Metallic Silky Pastel. 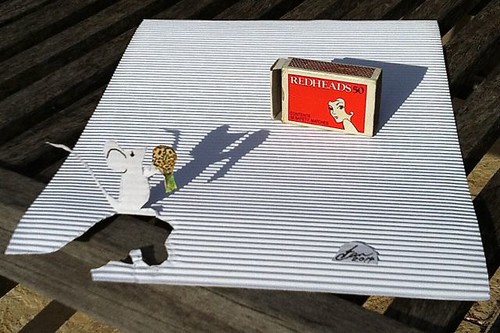 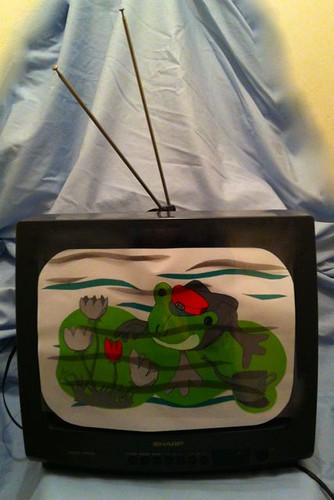 A huge challenge for a red/green colour blind man, but I thought I might take you into my secret world of 1958-1975. When the rest of Australia was watching b/w transmissions, I was able to see black, white, grey and *green*, especially in cartoons! (I added some red, too, because I've come to realise that red and green are the same wavelength to my eyes.) It was a family discussion during an episode of "Happy Days" (1974, just before Australian colour test transmissions started here ) that led to this amazing revelation... that I was colour blind! Bok the Frog was drawn on cartridge paper, photocopied on various red, green and grey sheets of paper, elements cut and pasted as a collage, and the plastic overlay of grey ripples was printed by b/w photocopying the green ripples on the backing sheet onto an overhead projector plastic cel.

Bok the Frog (and his garden of croakuses) as only I would have seen him: 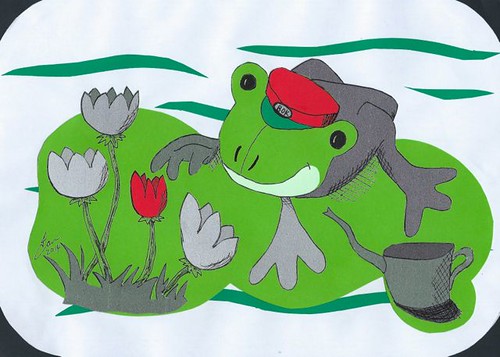 Week 20: Colour II
Bok the Frog (and his garden of croakuses) as *most people* would have seen him, had he been on b/w TV: 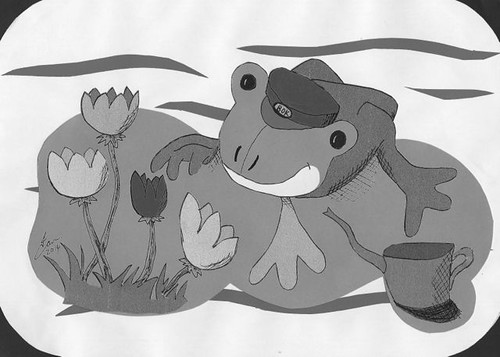 Udates: I had a new colourful idea: Here's a miniature gesso canvas painted in acrylics by me, on behalf of a bendy, smiley man, with detail in black Unipin fine marker, and silver and gold Signo pigment ink. 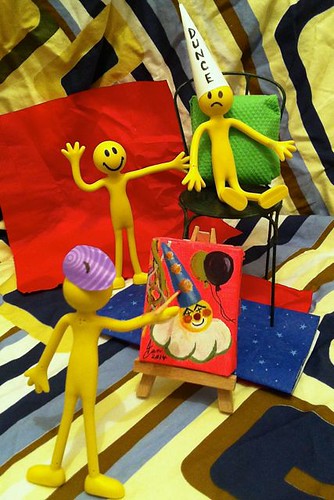 Dyed chicks at the Royal Easter Show, before the RSPCA complained. Fingerprint art with acrylics and a black Sharpie: 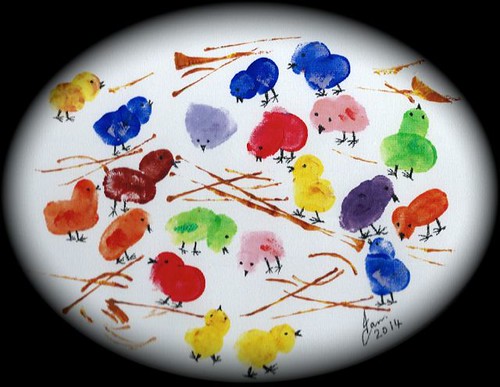 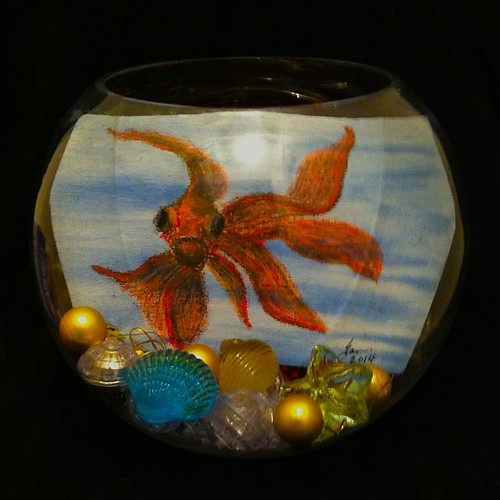 Ahhh, what a quandary! I made a set of prints (monoprints, but I got two good ones off the positive) attempting to do a "Fish II" entry for the 52-Week Illustration Challenge - and it's soooo colourful, I wondered if it was better to save as a "Week 20: Colour" entry. It needed some work when it was dry, so I was mindful of the possible changed theme as I went. Being red/green colour blind, next week's theme was always going to have its challenges. Of course, my other quandary: at first, the original "positive" I created probably looked better than the "negative" prints. Choices! Decisions!

I'm quite pleased with how it turned out, especially when mounted in one of my bargain bin $3 mounts! It's a monoprint negative, with acrylic paints brushed onto the cardboard positive. Moistioned cartridge paper applied and peeled off then, when dry, a few details were added with waterproof black UniPin marker and Faber-Castell watercolour pencils. 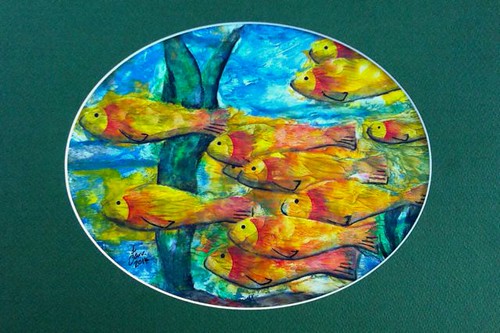 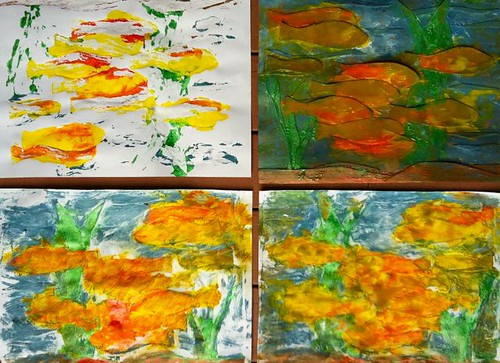 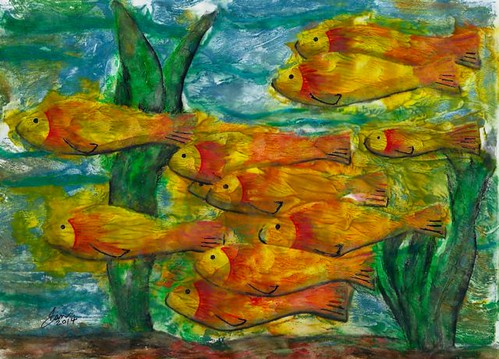 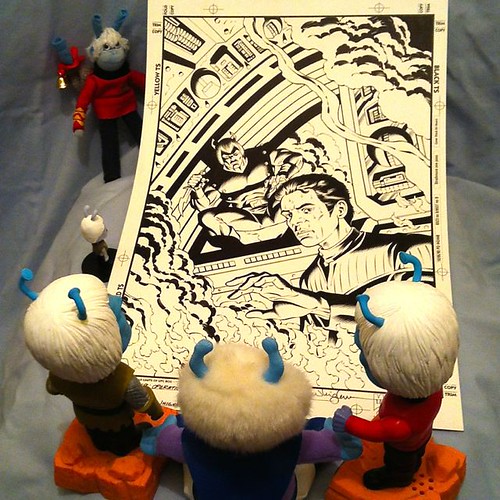 New eBay win! Original full-page art for a Marvel "Star Trek: Deep Space Nine" comic that never happened. This was for a storyline called "Operation Seastrike", with art by Rod Whigham & Philip Moy, and signed by Rod Whigham. That's an Andorian about to ambush Dr Bashir, of course. This art caused great excitement amongst my Andorian toys today!

Daddy Borg Skele-Trek and more than Set 1 of the miniature Skele-Treks. Note that the Data Skele-Trek figure now has yellow eyes (I figured a zombified android's eyes wouldn't go black and inert). Plus they've been joined by a new Andorian, which I customised! Featured are Kirk, customised Andorian, Kor, Gorn, Mini-Me Borg, large Borg, Data and Picard.

Posted by Therin of Andor at 11:58 pm No comments:

At long last... the conclusion is online! Starship Exeter: The Tressaurian Intersection

And the first episode, with a cameo by moi...

Posted by Therin of Andor at 12:20 am No comments: