Paramount's goal with the forthcoming "Star Trek" movie sequel from JJ Abrams is said to be, "... to finally attract more filmgoers overseas since the franchise had never done $100M international before." The US release date is set as May 17, 2013. In 3D!

I have no problem with 3D, and fully expected it for this one. We want ST to be successful and popular, and most recent successful, popular movies are in 3D. I've seen some great 3D movies in recent years - both filmed-in-3D and converted-to-3D - and if that's the way to draw in even more general cinema-goers, then why not? The ST fanbase alone does not buy enough tickets. "Star Trek: Nemesis" proved that.

3D also means there will be a 3D TV Blu-Ray release alongside the regular DVD and Blu-Ray discs.

TOS in syndication prime time reruns had a big, reliable following because it was accessible to the general public over many years. TNG in first-run syndication built a huge audience that ensured that the franchise sold lots of merchandise.

People also forget that "ST III: The Search for Spock" was, at one point, announced as being in 3D. There were plans for funky, collectible, ST 3D Starfleet glasses, too.
Posted by Therin of Andor at 6:40 am No comments:

Hip hopping into the festive season

Year 4 of an annual tradition.
Posted by Therin of Andor at 1:23 pm No comments:

How does this Smurf smell? How does this Smurf smell? Terrible!

(Remember the stuffed Smurfs I photographed recently, whose noses were sewn on upside down? Well, on the weekend, I bought a blue plastic toadstool containing a little toy Smurf - and he emerged from the container with NO NOSE.) Posted by Therin of Andor at 10:20 pm No comments: Seen today in Penriff, outside the bottle shop.

"OMG, they trashed Santa!" (He found a Claus in his contract.) Look familiar?
Posted by Therin of Andor at 10:26 pm No comments: 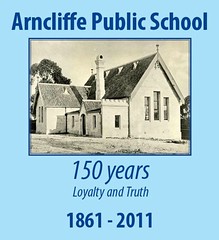 "My first year at Arncliffe Public School, 1964, was spent in the quaint sandstone building (now the staffroom) that straddled the infants and primary school playgrounds. Sometimes, when it rains, I can almost recall the smell of damp, wooden verandah, plastic raincoats, warm fingerpaint, and school milk in 1/3 pint glass bottles. The infants' Mothers' Club used to turn our school milk allocation into hot cocoa on winter Cocoa Days. All you had to do was remember your plastic mug! Other early, strong memories include child-height blackboards all around the walls (decorated chalk friezes by Miss Jones, our Upper Kindy teacher), little white chairs and tables, and an old wooden highchair, which was our Birthday Chair. 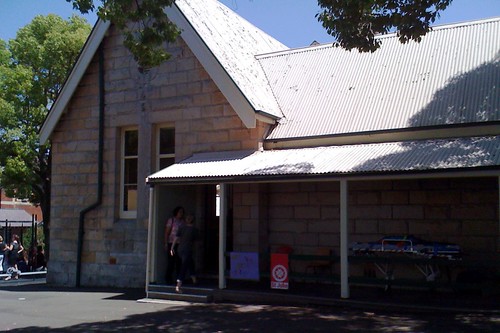 "In the 60s, boys' and girls' Infants playgrounds were separated by big trees down the middle (with bench seating around them). The boys had the 'Gully' side, near Avenal Street. If any boy attempted to play with the girls, he would be sent to sit quietly 'in the circle', a painted ring in the middle of the girls' playground. The primary department kept boys' ball games to the grassed area (when it wasn’t a dustbowl for marbles). The Segenhoe Street buildings, including Teluba, used to be the separate Arncliffe Girls' High School (until the girls moved to Tempe Boys' High in the mid 70s). Friday afternoon sport for Years 3-6 was always over the footbridge to the fenced paddock on the other side of Princes Highway. Between lunchtime and sport, there were weekly films, shown on a reel-to-reel projector by the 'film boys' in the assembly hall.

"The canteen was only open for lunch orders on a Monday, run by a parent, Mrs Mullampy. The cream buns and pineapple donuts were impressive! On the other days, a woman from a nearby 'tuck shop' would arrive in the playground with a bundle of paper bags to take our orders. When her shop closed down, the owner of 'Angelo's' Italian milk bar, delivered lunch orders. Eventually, our canteen was available five days per week. I'm old enough to remember when Sunny Boys, Razzes and Glugs - ice blocks in triangular pyramid-shaped Tetrapaks - were just five cents each.

"Coronation Hall was the venue for annual Speech Nights. A highlight of my time in 4A (1968) was when Mr Mercer greatly expanded 'The Mummers' Play of St George', in which I played a pompous doctor who raises up the seemingly-dead evil knight, Bold Slasher, so he can challenge the mighty St George in battle. We were the finale of the evening, and our parents weren't expecting the amazing greasepaint makeup jobs we all received backstage. The next year, 5A performed 'Alfie at the Circus', and I was thrilled to be cast as naughty schoolboy, Alfie. (I've used the script in schools many times since.) The whole class was seated on stage in rows, looking out onto an imaginary circus. I had to run out a side door, supposedly eaten by a huge, angry lion, go into the darkened street, around to the front of the building, and down the main aisle, to announce that I'd let out the snake charmer's pets. 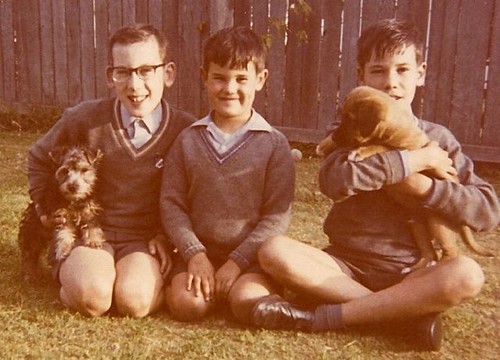 Ian with Mr Chips, Brian, Keith with Mac, 1970
"There was also a visit from 'Skeeter the Paperboy'! In 1970, we had a fancy dress night, also held at Coronation Hall. The surprise judge was James 'Skeeter' Kemsley, whom we all knew as the host of Channel 9’s 'Cartoon Corner'. I was a pirate that night and my brother, Keith, was a skeleton (it took my family several nights to paint white bones onto black material). Actually, we both wanted to dress as characters from “The Wacky Races”, to impress Skeeter, but we couldn't work out how to make life-size, working racing cars out of cardboard. Between his career as Skeeter and his untimely death, James Kemsley was the cartoonist on 'Ginger Meggs' comic strips. 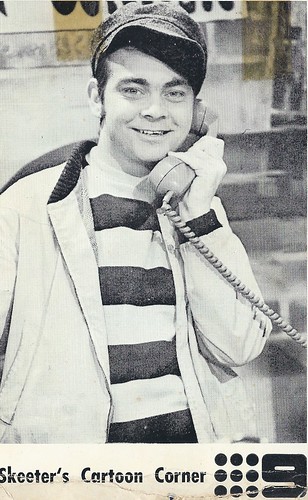 James 'Skeeter' Kemsley
"The school’s own hall, where Mr Mason’s classroom is today, was the venue of weekly primary assemblies, and numerous lunchtime plays. In 1968, 4A’s students adapted a Classics Illustrated comic of Shakespeare’s 'Hamlet'. During 1969, Miss Witheridge organised an operetta of "Snow White". There were two night performances for parents. While most roles were filled by Year 6 students, I was cast as 'Max', the head dwarf. Along with six younger students of small stature, we were told to wear our 'jammies' for dwarf outfits, and to make our own beards. 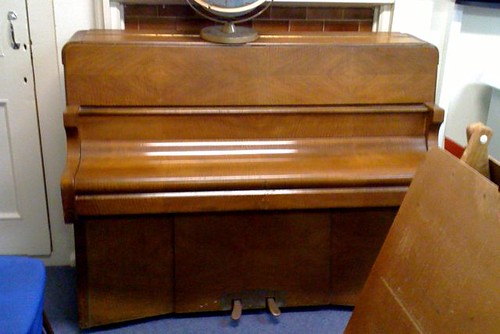 Miss Witheridge's piano
"I was sick with the flu the week of the 1970 school photos, and missed my big chance - as School Captain - to hold up the little 'Class 6A' sign. I was devastated that boys' Vice Captain, Peter Vandine sat in my place, alongside Jenny Hinton. I still can't believe there were so many of us in that class! How did ever fit into the classroom? Luckily, I guess, in those days the wooden desks were still bolted to the floor! 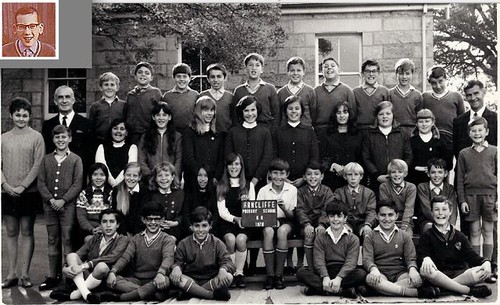 6A in 1970
"Other memorable staff members during my time at Arncliffe were scary Mr Pearce (who used to serialise an amazing, original science fiction story each week to 3A, when Mrs James took on an interschool netball team), friendly Mr Proudfoot, my Year 5 craft teacher - and my first teacher-librarian, Mrs Janette McKenny (1967-1968), with whom I exchanged Christmas cards and phone calls for several decades. What a surprise when she married Milton Mercer, who had been my Year 4 teacher! In 1990, I retrained as a teacher-librarian, and still consider Mrs McKenny to be my inspiration! 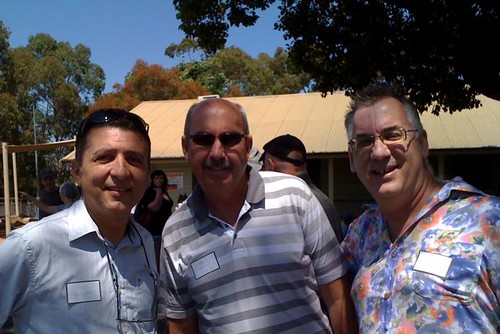 My old school, Arncliffe Public School, is turning 150 on Saturday. I'm Class of 1970, and was school captain - and very excited to be going back to check it out. I've tempted two of my former teachers to go, and hoping to catch up with old classmates. Was also asked to contribute a double page of memoir for the souvenir book.

The pic is me in 1966, standing in front of "The Gully" that ran through the then-Infants playground.
Posted by Therin of Andor at 7:07 pm No comments: A Smurf nose all. Is it just me, or did someone at the toy factory sew those Smurf noses on upside down? I know the central figure is supposed to be Astrogirl, but the packaging logo reads "Astroboy". Presumably, there are other figures in the series of "Astroboy" toys and they all have the one series logo. But he looks so cute in the pink skirt.
Posted by Therin of Andor at 6:54 pm No comments: