A few weeks ago, one of Australia's "current affairs" programs, "Today Tonight", tracked down the now-elusive Australian icon, Abigail (aka "Number 96"'s first Bev Houghton), who had holed herself up in a disused country church building after being flooded out in Victoria's share of 2011: The Year of Natural Disasters.

Mmmmm. None of these reports by the TV tabloid shows ("Today Tonight" and similar, opposition "A Current Affair", or was it the other way around? - the shows are almost interchangeable sometimes) have lived up to their mysterious and frenetic hype. It’s crazy when the “What dark secrets of Aussie TV will be revealed this time?” segments seem shorter than the oft-repeated promos that lead up to them. I guess it gives us a respite to the other TT and ACA exposes that often turn out to be extended advertisements for their networks' latest dancing, cooking or weight-loss lifestyle shows.

One of Abigail's defenders on Andrew Mercado's website (article linked here; see also TV Tonight) was Sheila Kennelly, better known to "Number 96" fans as Norma Whittaker. Well said, Mrs Whitt! And great to see her online! I love how the “Number 96″ cast continue to look out for each other in so many ways. When I was interviewing many of the cast in the 90s, it was frustrating that the anecdotes of those groundbreaking years at Channel Ten were mostly warm and affectionate, not the nasty stuff that sells books (and editors need for getting the marketing people on side).

It’s disappointing that Abigail has chosen to retire from showbiz. Her performances were always compelling to watch, whether selling B&D Rollerdoors and Amber tiles, or flirting with Don Finlayson (below) , Jack Sellars and Alvin Purple. I hope she can again slip into her self-chosen countryside obscurity as/if she so wishes. Have a great Easter!
Posted by Therin of Andor at 8:11 am No comments: Twice this month, when I've checked my bag at Galaxy Bookshop's front counter, and received my check token, I've been... Wil Wheaton!
Posted by Therin of Andor at 9:37 am No comments:

Invasion of the dodos It might be extinct as a species, but there's certainly no shortage of dodos here this week! Above is a 2D scan of my Nimslo 3D shot, taken in January 1984, of a real dodo skeleton in the Natural History Museum of the Smithsonian Institute in Washington DC. I finally got around to scanning it. My newer scanner has difficulty interpreting the lenticular laminate on my 3D photos, but the old scanner handles it well.

But these are some recent arrivals, after a bout of dodo madness on eBay: Dodos from "Primeval" (by Character Options) and Safari A Harmony Kingdom dodo keepsake box
Posted by Therin of Andor at 2:18 pm No comments: In December 1985, there was only a wildlife sanctuary and a souvenir shop at Table Top, aka Ettamogah, namesake of the famous Australasian Post "Ettamogah Pub" cartoons by Ken Maynard. These days, there is an actual replica of the comic strips' gravity-defying pub (and replicas in other tourist locales) - but prior to that you could sometimes catch a glimpse of a real live bunyip, that was kept in a special pen at the wildlife sanctuary.

The display was "out of order" the day I visited. Supposedly, if you lifted a flap, the bunyip would rise up out of his muddy swamp and squirt water at you. I hoisted my camera over the fence to snap this rare shot.
Posted by Therin of Andor at 9:59 am No comments: The shooting model of the starship USS Enterprise from "Star Trek" the original series. These pictures were taken in January 1984, at the Air and Space Museum, Smithsonian Institute, Washington DC, USA. I used my Nimslo 3D camera, but these are 2D scans, of course. (This is also pre the controversial restoration the model underwent in 1992.) Posted by Therin of Andor at 10:12 am No comments: "The Wizard of Oz" wax figures at Movieland Wax Museum, January 1984.
The museum used to be opposite Knott's Berry Farm in Los Angeles, USA. Our award-winning costumes from the gala premiere night of "Ghostbusters", 1984.
The signs on our backs read "Rent-a-Ghost". I'm holding a red fly-swat, but included in our winners' goodie bag was... an official logo "Ghostbusters" ghost-swatter. "Cometcon Blankety Blanks" (1986) with guest panelists, T'Pring, Spock and a Peoplebuster.
Posted by Therin of Andor at 11:55 pm No comments: In the 70s, "Gold Rush" bubble gum, in little, plain calico bags, was popular. The bags contained yellowish-gold "nuggets" of bubble gum. I still keep a small coin collection in one. Above is the original US box art of "Gold Rush" bubble gum (as posted on the Universal Monster Army BBS by Hepcat). I think the gum was distributed in Australia by Scanlons. When revived a decade or so later, the cute, little, calico bag was replaced by a less-authentic, plasticised, waterproof bag - original... and grape flavour???

But below are Espeez (UK) "Gold Mine" nugget bubble gum by SP Enterprises Inc., and Mexican "Gold Nuggets" by Candy Creations Manufacturing Group. The new design means that the gum is separately packaged in an inner bag of clear cellophane. The gum is paler in colour to the original I remember. I found these at Sugar Fix in the CBD. Posted by Therin of Andor at 9:55 pm No comments:

I was just reminded that, according to "Terminator: The Sarah Connor Chronicles", Skynet goes online next Tuesday, April 19, 2011 - and launches the missiles two days later.

Is the Governator still in office?
Posted by Therin of Andor at 8:04 am No comments: Clockwise, from top left: Dodo, Alice, Humpty Dumpty, Gryphon, Cheshire Cat, Mad Hatter, Mock Turtle, White Rabbit.
I ran across eighteen Kaiyodo "Alice's Adventures in Figureland" for display in the school library last night. I collect dodos - and have always coveted my late uncle's larger Royal Doulton ceramic dodo, based on John Tenniel's design, from the Lewis Carroll novels ("Alice in Wonderland" and "Through the looking glass"). This little dodo was hanging on the front of a peg in a favourite toy shop - and I loved the quality of these irresistible little figures. I accidentally picked the right Alice (out of four possibles), too; when I got her home, I realised she came with half of Humpty's wall. Today, I glued them all to a wooden base and grassed it with model railway "grass".

More "Alice" stuff on my other blog can be found HERE! (Scroll down) I bought this beautiful ceramic one, by a local artist, in the early 80s: And here's my holy grail, from Royal Doulton:

But look, there's more!
Posted by Therin of Andor at 10:45 pm No comments: I'm just back from "William Shatner Live"! At the gorgeous State Theatre, Sydney, venue of the gala premiere nights for both "Star Trek II: The Wrath of Khan" and "Star Trek IV: The Voyage Home" back in the good ol' days. Very entertaining. Highlight of the night: Shatner did a spoken word version of Men at Work's song, "Down Under", which led into a recitation of former Prime Minister Gough Whitlam's speech following his Dismissal by the Governor-General in the 70s, which led into a spoken word portion of our national song, "Waltzing Matilda".
Posted by Therin of Andor at 1:20 am 1 comment:

Time to get "Away From it All"

And, if you can sit it out, you shall understand all. (I've been looking for this for a loooong time.) This travelogue ran as a film short before Monty Python's "Life of Brian" in some cinemas and has not been seen since. (And it's not on the DVD, much to fans' frustrations.)

Australia continued the tradition of film shorts for much longer that the USA. I think the last genuine film shorts I can recall seeing with main features in cinemas were "Rocking Horse Winner", which accompanied all of our viewings of "Star Trek II: The Wrath of Khan", and the black and white short film "Frankenweenie", which accompanied Disney's "Baby: Secret of the Lost Legend" - much to the surprise of "Frankenweenie" director, Tim Burton, who only discovered that it had finally been given a release when my Sydney-based "Batman" fan club, "Battalion", was able to attend a Tim Burton press conference in 1989. 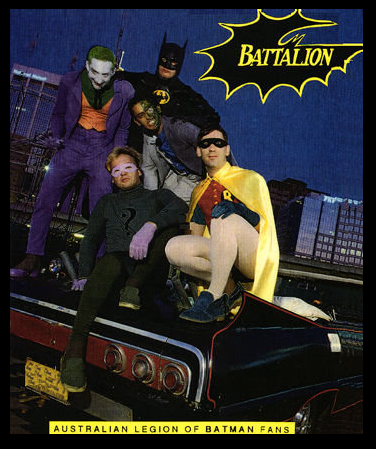 Posted by Therin of Andor at 7:33 am No comments:

1st April 2011 will go down in history as the start of something revolutionary in ICT!
Posted by Therin of Andor at 7:43 pm No comments: