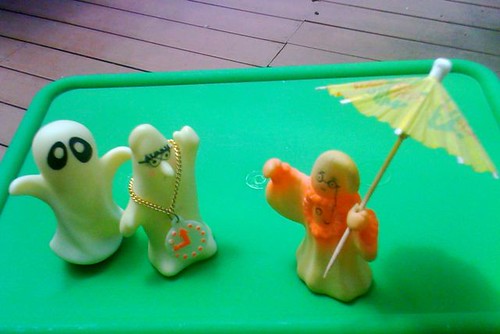 Despite the enormous watch and chain he wears around his neck, the Hasbro "Kooky Spooky" patriarch, Daddy Booregard, tries to explain to Grandma Macreak just why he's 40 years late for dinner. And he's brought a freeloading ring-in, Gilroy from Avon, with him.

The Kooky Spookys are glow-in-the-dark finger puppet toys, designed in 1968. As a kid, I really, really thought I was getting a Daddy Booregard for Easter 1970, after my brothers and I scored Kooky Spookys for Christmas 1969. (But thanks eBay! Daddy and Gilroy both arrived today, from different locales in the USA. Gilroy contains 1977-vintage "Care Deeply" lip balm.) Everyone still glows in the dark like the year they were made! 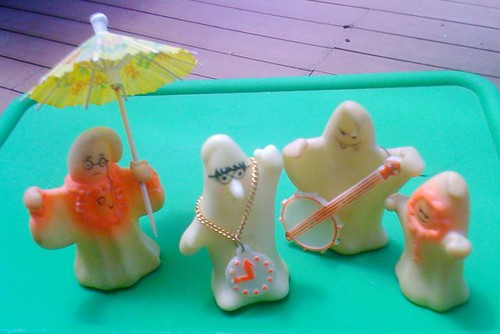 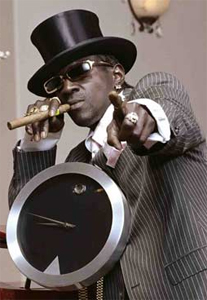 Flavor Flav
Yes, Daddy Booregard was trendsetting Flav's look way back in 1968. In one early design, Patti Peticolas had Daddy wearing a pocketwatch-sized timepiece around his neck, then she jumps to the huge clock design. I had no idea about Flav until we had a nerdy young guy turn up on a season of "Australian Idol", a few years ago, emulating the look. So bizarre.

My PhotoPeach slideshow about Kooky Spookys is HERE! I recently rejuvenated a Wendy Boston teddy bear (right) belonging to my brother. Both he and the bear turned 50 this year. I dyed him from a pale, faded, turquoise blue - which had become more greenish than blue over the decades - and restuffed the poor, pathetic, flat thing with fresh wadding. I sent it off to arrive just on Christmas Eve and my brother opened it in front of all his family. Hilarious!

Christmas in Sydney, no, make that Nowra!

A last minute mercy dash to South Nowra - my mother had just come out of hospital and wasn't able to travel to the planned family reunion Christmas we'd planned for her, so I went down on the train to ensure she wasn't on her own - meant that I didn't get the tree out for Christmas this year. But that never stops me finding my two, new, dated ornaments. This season's two ornaments are: A Hallmark gingerbread Noah's Ark (left), actually dated in very tiny, faint font as a 2009 collectible ornament, but I bought it the same week as finding last year's Christmas polar bear, which had a very prominent 2009 date on one paw, and was destined to celebrate the "Bear and Chook" picture books. So the ark went into storage, still in its box. The great SpongeBob Squarepants ornament (right) continues the "tied up with Christmas lights" theme already represented by previous years' Pinky & the Brain and Shrek & Donkey. A closeup of Patrick, back-to-back with SpongeBob.
Previous ornament blog entries include:

Posted by Therin of Andor at 4:56 pm No comments:

Every year, the members of Playtrek, the listserv for collectors of Star Trek action figures, can participate in "Secret Spock", in which Star Trek related gifts are sourced and sent to each other, without the identity of the givers becoming known (at least at first). Although I don't usually participate, one Playtrekker had difficulty sourcing a new, carded, Romulan action figure - and I volunteered to forward one to the intended recipient, sending it back to the USA. I'd ended up with at least one duplicate, in my attempt to ensure I didn't miss out on a Romulan, which was seemingly going to be tricky for many to locate. At the last minute, I realised I had a rare opportunity to make the gift even more exciting. Using my own opened Romulan as the stand-in, I surrounded him with Aussie souvenirs ( which I later "carded" with Gladwrap onto the mint figure), created holiday snapshots in my backyard and even designed a Photo Peach slideshow. The slideshow requires that your volume is up.

Enjoy! I hope Secret Spock was kind to you all. Posted by Therin of Andor at 5:07 pm No comments:

In the 60s, our annual trip to a big department store in the city was to to have our photo taken with Santa Claus. We didn't spend too long in the toy section - and we knew that anything we saw that we really coveted had to be mentioned to Santa, then it was fingers crossed until Christmas. (As an adult, it always amuses me to hear and see liitle kids throwing tantrums in toy departments and getting really expensive stuff bought for them, on the spot, just to make them shut up.)

One Christmas, Santa's grotto in Grace Bros was filled with old, gnarled trees (rather like the cranky ones that threw their apples in "The Wizard of Oz"), and my little brother was freaking out by the light-up creature eyes in some of the darkened, hollowed-out trunks. For several years, he refused to enter numerous department store toy sections for fear of meeting "big eyes"!

I ended up going to teachers college around the corner from that Grace Bros store in 1977. For three years, it was my daily haunt for lunchtime bargains. During one huge sale, they opened up a basement-level department filled with boxes of LP records, books, toys, etc. I suddenly had a very weird, nostalgic feeling and lo, behind a trellis partition were the same old papier-mache and chicken wire trees (and many oversized thematic decorating props from decades gone by!) These days that kind of stuff is alway rented, never stored, restored and created by a permanent team of department store workers. Another day, I suddenly realised that the guy who sat behind a booth, and made the regular announcements over the sound system every day, was the old store Santa we'd meet annually in the 60s! I also saw him on a TV news segment once: every year, he ran the Sydney Santa School for prospective store Santas.

A more recent department store anecdote: when Playmates had the boxed set of "Star Trek" action figures on the TV bridge, I wanted to buy a second set for customising. One big city store had created a basement level toy section (moving down from the sixth floor), and it was quite reminiscent of the basement toy grottos of old. I watched the price stay high on one last boxed set, then it disappeared. I'd waited too long. Then they had a massive "50% off everything sale" and the set was there again. I took it over to the till and a young salesman watched me buy it, helped to bag it, then said to the young woman serving me, "Those sets are so great. I've got one for me, put aside in the back room."

My parting memory is of his stunned and disappointed face when she said, "That is the one from the back room."
Posted by Therin of Andor at 9:07 pm No comments: Posted by Therin of Andor at 6:23 pm No comments:

Today I share my birthday with Michel de Nostredame (better known as Nostradamus).

Wow! My professional learning blog, "Booked Inn", has been nominated on a shortlist for "Best Librarian/Library Edublog 2010" in The Edublog Awards. Voting (please click HERE) doesn't seem too complicated; I would love your support. Many thanks in advance! It's such a buzz to make the shortlist. (Looks like all that work on Build Your Online Profile with Tristan Bancks, at the Sydney Writers' Centre in Term 3, is really paying off.)

Also, as an update to the work done by Kindergarten students this term, the first of our Photo Peach slideshows for the "Travelling Fearless Project" garnered 726 views (and 40 comments, including Sarah Davis, the illustrator of "Fearless"). Simply astounding! And it gets better: I Just received an automated email, via Photo Peach, that someone had made my page a favourite of theirs. I was curious, so tracked back and ended up on the main search page. It seems that, of Photo Peach's 42 pages of "Recently Popular" slideshows, "Travelling Fearless" is on Page 1 (one of 15 image links sitting there, gathering even more views as I type). And the sequel, "Farewell Fearless!", is on Page 3! It's not easy being green... An Orion slaver from the
"Star Trek: Enterprise" episode, "Borderland".
Which reminds me, I once bought a wrestling figure of Big Show (aka Paul Wight), who once also appeared as an Orion trader on "Enterprise", but I never got around to painting him green... Big Show (aka Paul Wight) as an Orion trader, with T'Pol on "Star Trek: Enterprise".
Posted by Therin of Andor at 10:45 am No comments: I loved the bizarre juxtaposition of travelling home with two new toys for the collection yesterday. Grug, on the left, is a toy tie-in to celebrate the re-release of a hugely popular Australian picture book series from the 1980s, Ted Prior's "Grug". The "Grug" books were little miniatures, rather similar to "Mr Men" books. Grug was a cave creature who spontaneously evolved from a native Australian burrawang plant, and in subsequent adventures, began learning about the world around him. I recently met a full-sized Grug HERE. Boxed sets of Grug are popping up in Aussie bookstores as Christmas stocking stuffers.

On the right is Khan Noonien Singh, a rather cool, licenced "Star Trek" plush doll (from "Star Trek II: The Wrath of Khan") by the Toy Factory, a tie-in to IDW's Khan comic mini-series, which serves as a bridge between the episode "Space Seed" and the plot of the second movie. The staff at King Comics hadn't been sure if they were going to be able to source any Khans, but I'm glad I pre-ordered him and had people looking out for him for me!

As Khan knows, who needs a Tattoo when you have... Grug!
Posted by Therin of Andor at 5:39 am No comments:

Time for a recharge Seriously, it's been a long eight weeks, and there are probably another eight weeks of treatment to go, but Jack has been recovering from "non-infectious, mild meningitis". If that's what "mild" meningitis is like, I don't want to see anything worse. He seems to be making a great recovery now, but the task of "keep him calm" was the most difficult aspect of his prescription for a return to normality. Keep a Jack Russell terrier calm? They don't do calm. The hair won't start growing back until the run of cortisone tablets is finally over. So, yes, his back still looks like his "battery cover" has been removed (tapping of spinal fluid), and his tummy is still bare from an ultrasound many weeks ago now.

It also seems that the time I usually update this blog has been subsumed by medicating the dog morning and night. Every day, a different plan of drug administration must be coordinated, lest the wily Jack Russell suspect that something is afoot.
Posted by Therin of Andor at 7:10 am No comments: