"What does the fox say?" (Inspired by the quirky Youtube song by Ylvis.) Freehand-cut white paper collage, glued over song lyrics in Word on red card. Highlights and shadows in yellow, orange and black watercolour pencils and silver Sharpie. 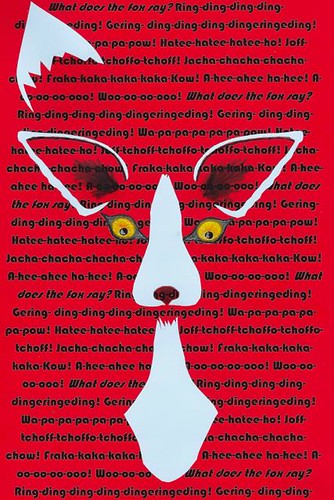 Nobody here but us chickens! Black fine point ink and watercolour cartoon. Drawn without pencil lines! 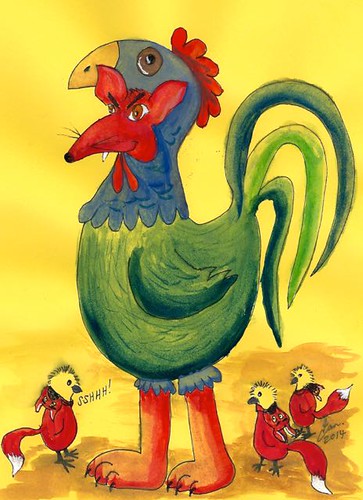 Someone else beat me to this phrase but I decided to go ahead with my concept anyway. Extending an idea from Week 39 "Words", here is "A quick brown fox jumps over the lazy dog", created in Pages with a little black Stained and finepoint Sharpie, brown pencilling and a touch of yellow acrylic. 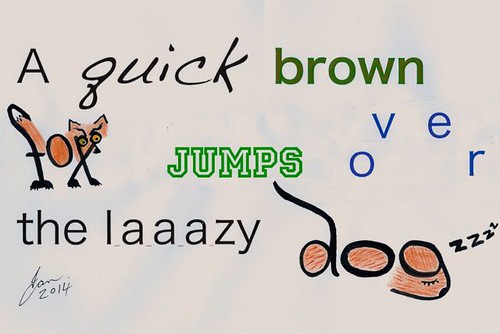 I had no intention of doing another fox this week, but I encountered an old newspaper ad about two hours ago, and initially had thoughts of a traditional drawing based upon the photo. Suddenly, it demanded to be an assemblage artwork, and I found myself fashioning a fox fur stole from a red chenille stick, cutting an outline of a woman, to give her a 3D effect, from an A3 sheet of yellow quill board, and painting her and the background with instant coffee. Details in red Sharpie and black Stained Sharpie, and the wording is cut from a print-out of the ad. Fox stole's eyes are some polished blue glass beads from a pot in the garden. Face of the model is probably inspired by all those "Redhead Matches" ladies of the 70s. She's propped out from the card by the width of the chenille stick. 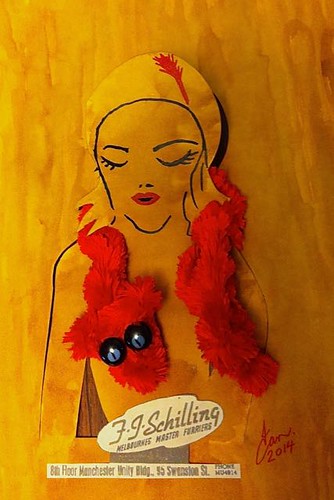 Approaching Liberty. Watercolour, with green Sharpie ink on the crown spikes. Based on a photo taken by me, in January 1984, just before the torch was replaced. 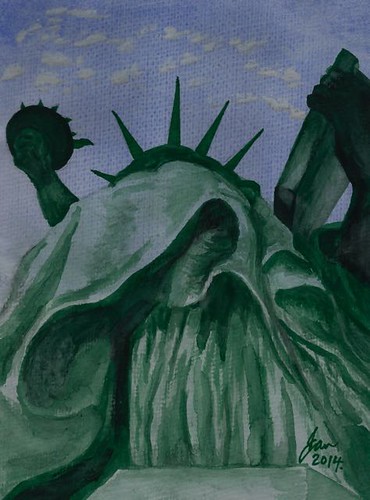 John Lennon Memorial in Strawberry Fields, Central Park, New York. With some strawberries and a little magic. Just imagine! I've been mulling this one over all week and strategising. I really wanted to do it, but drawing a mosaic like this, in the detail I wanted originally, could literally have taken months! Instead, it took about 30 minutes. Black Sharpie ink and watercolour. Texture provided by metallic pencil rubbed over my flyscreen wire door, plus a little added glitter. 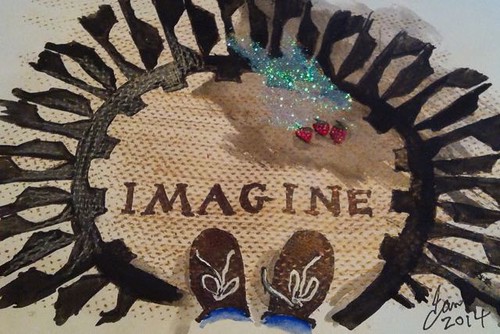 International Book Giving Day is running a bonus challenge to select four bookmarks that will be made available to online visitors.

My entry for the International Book Giving Day 2015 bookmark competition. Continuing the theme I tinkered with in Leaves Week. Emu in black, silver and gold Sharpie inks and white Signo on green handmade paper.

Emerging from the clown car. Black and red Sharpie ink, watercolour and collage (with various wrapping papers and tiny pompons) on A3 watercolour paper. I made a vague thumbnail sketch at work yesterday afternoon, and it was just going to be a painted sketch. Then I walked home, and passed a bargain store with $1 sheets of wrapping paper - and yet another collage was born. Each outfit was cut out freehand - no pencil lines! 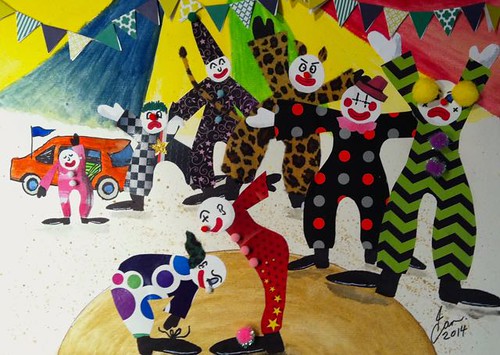 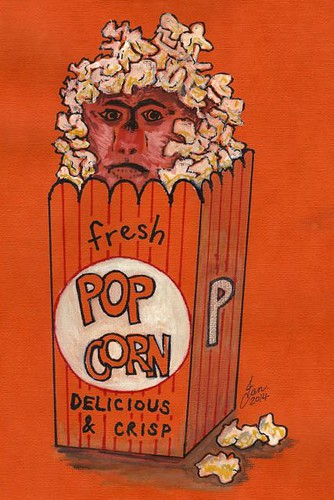 "Reaching new heights in the spotlight." Collage, watercolour, coloured pencil and black ink. Labels rendered in Word. I love the irony that the box with the messiest contents is the one that got upturned. 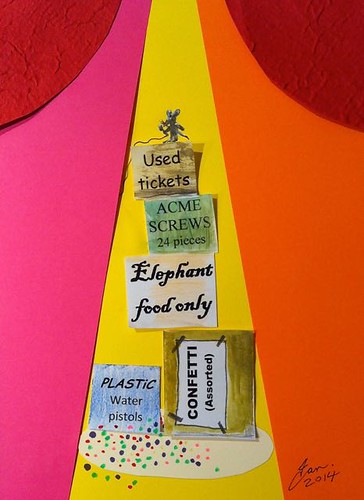 Watercolour - with no pencil lines - based on a photograph I took one Autumn in Bright, Victoria. The painting came together very quickly after a night of compiling a big batch of report card marks, but I'd had the composition in my head all last week. Getting into the painting was very therapeutic. My reward! 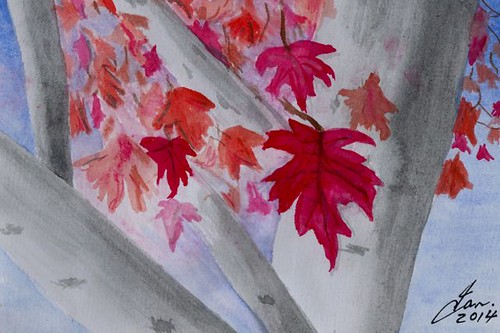 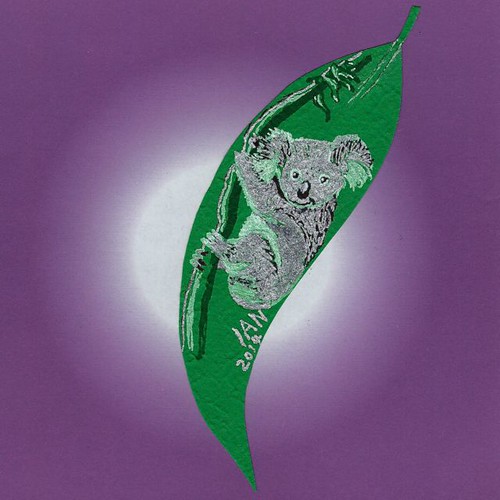 I ended up with a spare eucalyptus leaf shape last night, cut from green handmade paper remnant, so I decided a lyrebird would be the best fit for the available area. Sketched in brown Staedtler Triplus fineliner, white Unibolt Signo pigment ink, metallic silver and gold Pilot markers and fine point black Sharpie. No pencil lines! Mounted on a sheet of black card. 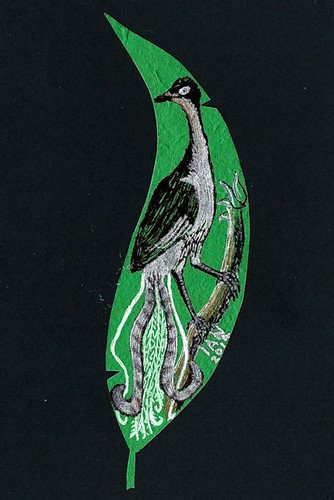 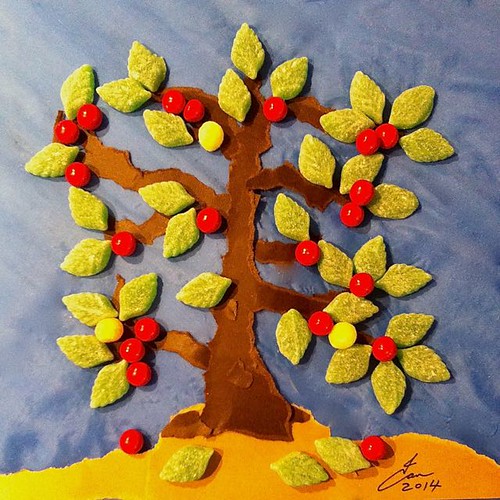