Just back from Mr Kim, the framer! Three Patrick Owsley sketches of "The Impossibles" (from the Hanna-Barbera series, "Frankenstein Jr. and The Impossibles") and a Spanish gum card!

I saw the set of three paintings on eBay - the cartoonist has an online store - just a few days after my gum card of "Los Imposibles" (sic) arrived from a different "Buy it now" auction.

Rally ho!
Posted by Therin of Andor at 7:43 pm No comments:

Miss Playtrek is still with Playtrekker Sammy in Bathurst, Australia, but her time with him is coming to an end. Since Sam did promise Miss Playtrek a chance to do some car racing at famous Mount Panorama, they headed there last Saturday... There were actual races going on, so her plan to "do a circuit" were nixed. But Sam did snap a quick pic: "Bye Bye Bathurst!"
Intent on having some racing fun, Miss Playtrek took to the streets below The Mount to show what she can do behind the wheel of the "Playtrek Porsche". Unfortunately, Sam wasn't the only one watching: Miss Playtrek meets Officer Ken.
Now that Brisbane's floodwaters have subsided, Miss Playtrek will be heading off to fellow Aussie John M, in Queensland... That is, provided she and Sammy have finished their ten hours of community service by next Wednesday!

Don't spook till you're spooken to 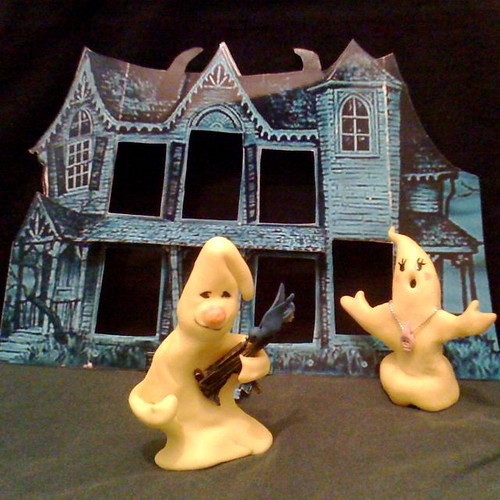 GodzillaGirl challenged me to dig out some more Fimo modeling compound and try making Shirley Shriek, an early Patti Peticolas "Kooky Spooky" design, who was morphed into the more commercial Mama Kaskit. (My housemate reckons Shirley looks a little too Ku Klux Klan.)

Bulbous-nosed General Gilghouly - note the newly-added bluebird perched on the more-suitable gun, as featured on Patti's sketches - and Shirley Shriek, with her skull necklace, using a length of silver neckchain I accidentally broke a few years ago. Waste not, want not. 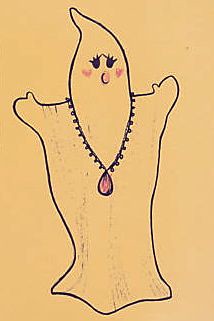 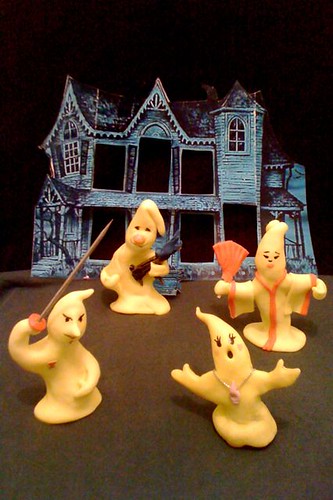 I managed to add Shirley to my existing Photo Peach slideshow. I bought my mother this funky cow family pepper, salt, milk jug and sugar bowl set in about 1975, and they survived three house moves, including interstate. When she returned to New South Wales last year, one of the calves had gone rogue and has never been seen again. I took a digital photo on a recent visit so I could more accurately search for a replacement. I was on a mission! And I can now report success.

After several close calls, I recently found a single second hand calf (pointing in the correct direction) on "Buy it now" eBay. There are so many variations on this style of ceramics, seemingly dating from the 50s, 60s and 70s, with very few having the bull as part of the set (the bull sugar bowl is what appealed to me so much in 1975), and many sets have dark purplish colours under the glaze, or any variety of painted details on the bells, collars and hooves. Similarly, prices for sets vary from a few dollars for lone pieces from broken sets to very large amounts if the sellers consider them to be "rare".

The horns and cow bell on this one were pale yellow (notice I've just enameled one horn metallic gold in the photo, as a test), and the blushes of hair colour are mauve on the replacement, rather than light brown - the brown-tinted sets do seem to be the rarity in my several months of looking, but adoptive bovine parents can't be fussy.

On the positive side, this little guy came in a random set of five single ceramic shakers, but still a good deal for the one calf I needed. I now have shakers resembling a red parrot, a Thanksgiving turkey, a weird duck and a dodo-like bird all looking for a shelf to warm.
Posted by Therin of Andor at 2:51 pm No comments: "I shall stick my fins into my ears and go
'La la la la la la. Not listening!'"
According to adelaidenow.com.au, "one of the biggest stars in our galactic neighbourhood - Betelgeuse - is expected to go supernova 'soon'.

"The infamous red super-giant star in Orion’s nebula - Betelgeuse - is predicted to go gangbusters and the impending super-nova may reach Earth before 2012. The second biggest star in the Orion constellation is losing mass, a typical indication that a gravitation collapse is occurring.

"'When that happens, we'll get our second sun,' according to Dr Brad Carter, Senior Lecturer of Physics at the University of Southern Queensland."
Posted by Therin of Andor at 7:23 am No comments: