One of my favourite episodes of the 60s "Batman" TV show was its penultimate adventure: "The Entrancing Dr Cassandra", featuring Ida Lupino and her husband, Howard Duff. A guilty childhood pleasure, and for a long time seemingly elusive in repeat, in the days of no episode guides or IMBd. 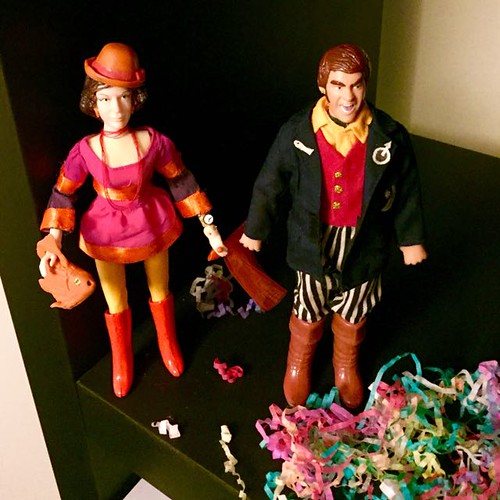 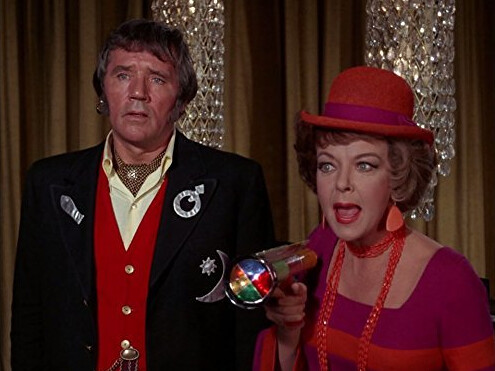 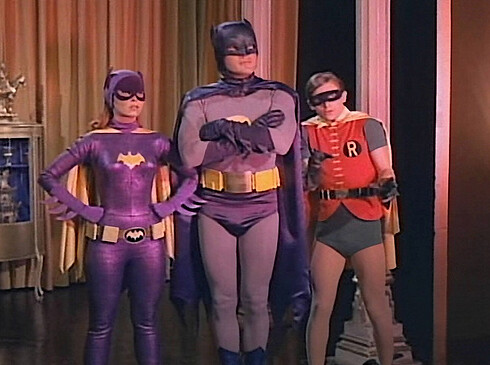 Dr Cassandra Spellcraft came from a line line of failed alchemists, but she did have some trippy, if shortlived, successes: camouflage pills that enabled invisibility, stealing the Mope diamond, and inventing an Alvino raygun that could rob people of their third dimension. She also succeeded in masterminding a jail break of all six of Gotham City's arch criminals: Joker, Penguin, Catwoman, Riddler, Egghead and King Tut. (The stunt doubles playing the arch villains in this episode were supposedly the regular ones matched to the actors from the series: Fred Carson as Joker, Eddie Hice as Riddler, Guy Way as King Tut, Al Cavens as Penguin, *unknown* as Egghead (not listed on callsheets, but Al Wyatt Sr. had double for Vincent Price in earlier episodes), and Marilyn Watson - who used to double for Julie Newmar before Eartha Kitt took over the role - returning as Catwoman. This penultimate episode was probably seen as a farewell opportunity to these performers from the producers. A reunion, as such.) 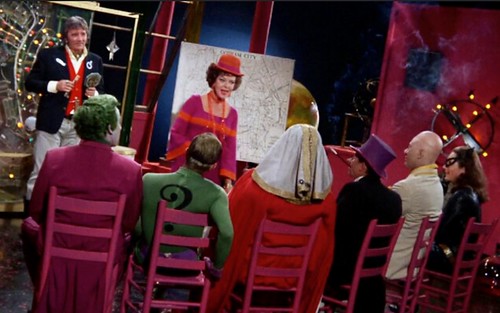 With all the great "Batman '66" tie-ins in recent years, and action figures in both a 5" and 8" format, I became resolved to create customs of Dr Cassandra and Cabala. Cassandra uses a 7" Juliet Burke (Elizabeth Mitchell) figure from "Lost" as the base. (I anticipated that "Big Bang Theory" Penny would arrive last night, as she did, and she was forfeiting her pink dress and boots. I tried to dye some spare Supergirl tights orange, but the nylon wouldn't hold the colour, so Aquaman lent her his shirt sleeves instead.) Cassandra's bowler hat and cane fish purse are made of orange Fimo. Meanwhile, Cabala had started life as an 8" bald "Anchorman" Battle-ready Champ (David Koechner) figure. I gave him quick-set putty hair, thicker eyebrows, an earring, an Andorian's boots and a "Wizard of Oz" figure's pants and vest, with the vest material covered in pieces of red discarded underpants (from my own drawer). 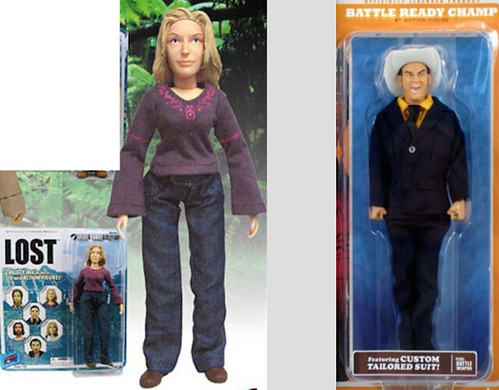 Source materials: Juliet from "Lost" and Champ from "Anchorman". 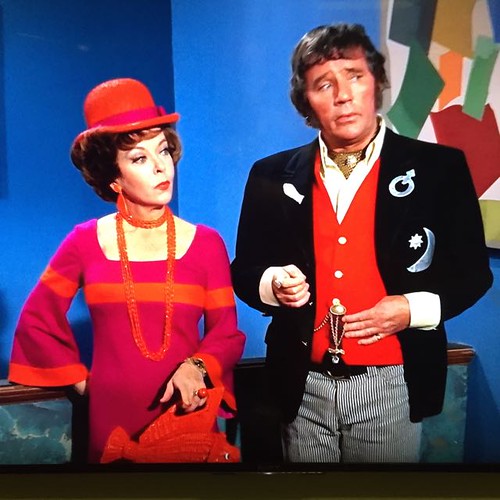 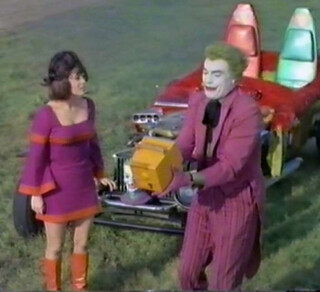 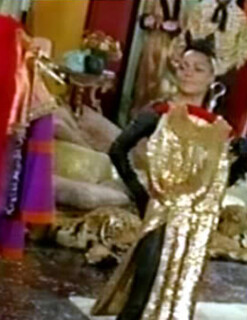 Cassandra's dress was seen before: on Josie (Joker episode), in a Catwoman episode, and on Octavia (Minstrel episode). 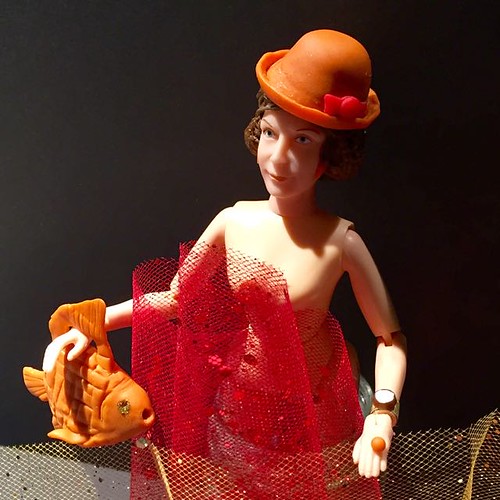 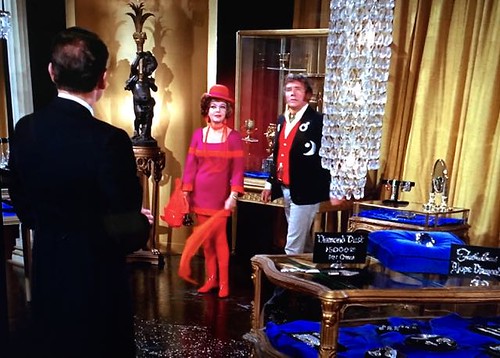 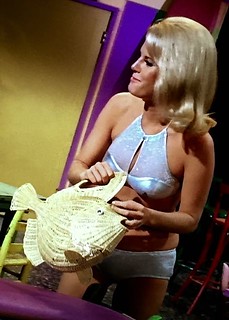 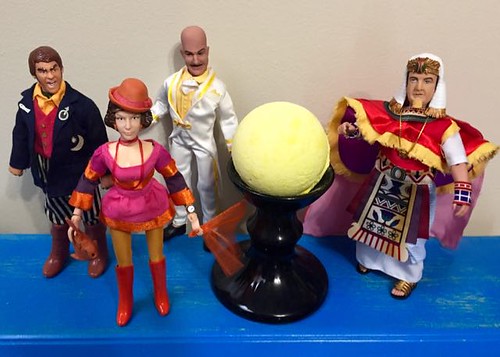 Above: My customised Dr Cassandra Spellcraft and partner Cabala action figures, from the 60s "Batman" episode, "The Entrancing Dr Cassandra". They stand with the commercially available Egghead and King Tut 8" figures. In the 70s, I attempted crude customs of Egghead and King Tut, now both long gone, but definitely a project that has stuck with me over the decades.

Okay, so I knew that Joker's moll, Josie, was wearing the pink and orange mini dress eventually used by Dr Cassandra, but recently I noticed that, in Part 2, Josie turns up in a new orange number (below) - but the orange tights and dangly plastic earrings worn with that outfit end up being teamed with the dress from Part 1 to complete Dr Cassandra's ensemble! 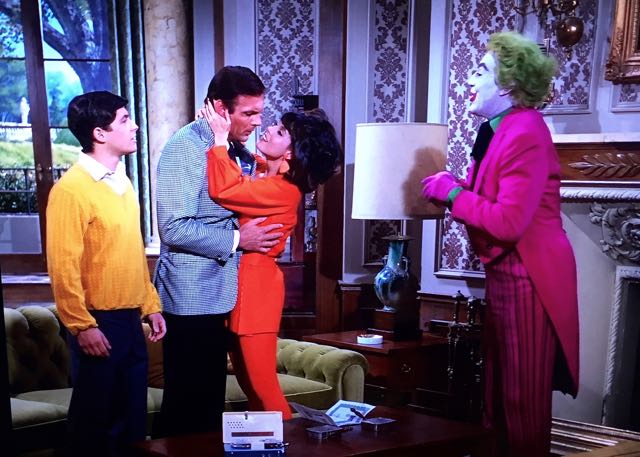 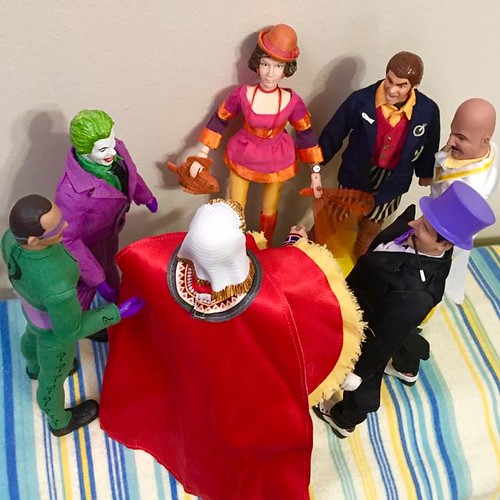 Do you reckon Dr Cassandra might have sought fashion advice from Mr Mxyzptlk?