I gave up on going into see the Parade the year Australia's one dollar gold-coloured coin came in - a group of friends and I stood at the barricades from 3.00 pm to get a good spot to view the floats, but still had people push in front of us anyway, just minutes before the parade started. We got pelted in the head with dollar coinsas people behind us tried to throwing donations into charity buckets for the Bobby Goldsmith Foundation. Ouch! Ouch! Ouch!

The Freak from TV's "Prisoner", actress Maggie Kirkpatrick, was on one of the floats and had a megaphone. She was asked to call out "Don't throw money!"... but people were deafened by the music and heering and only heard "...throw money!"

This year they can again party on without me...
Posted by Therin of Andor at 11:24 pm 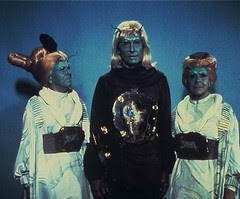